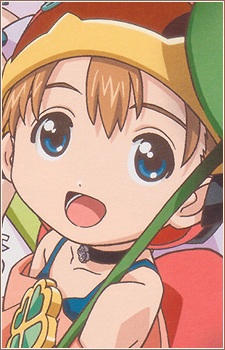 
The titular heroine from the magic world Phandavale (Magic). Her name means "Little Red Riding Hood". She is one of the Three Musketeers, and has come to Erde to protect Souta who holds the Erde Key. She uses magic, but her specialty seems to be physical attacks. She can control fire magic. Later on she gets an upgrade in her powers when the Three Musketeers try to obtain the ultimate magic. She was the one that received it and when activated it she called it Princess Mode due to the fact it makes her look like a princess like the other two Musketeers. The power is like the other card magic she usually uses. The only thing is, it does not stay active all the time, only when used. She was born in Vise village, the same village where she met Val for the first time: the morning after the village was destroyed. Eleven years before the story, the village was destroyed by werewolves led by Jed. Jed attacked the village to kill his younger brother Cain, who is really Val. During the destruction, she lost her parents and Cain's mother