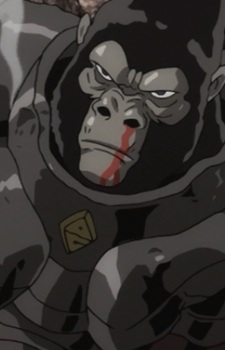 
Race: Mutant (Cyborg) Abilities: Cyborg Body Level: Demon Affiliation: House of Evolution Armored Gorilla is an artificial mutant created by Dr. Genus of the House of Evolution. Unlike his peers, Armored Gorilla's body is mostly robotic, making him the third-strongest specimen in the House of Evolution, and its only battle cyborg. Appearance: Armored Gorilla is a massive cyborg with a gorilla head. His body is protected by full plate armor adorned with spikes on its shoulders, knee pads, and gauntlets. The armor's belt buckle resembles a gorilla's face, and the chest plate features a custom patch featuring the letters 'A' and 'G' arranged in a diamond shape. While Armored Gorilla's head appears biological, it also houses cybernetic components. Personality: Initially, Armored Gorilla behaves like an automaton, communicating with technical readouts in a robotic, monotone voice. After he and his colleagues (Beast King, in particular) are defeated, however, he drops this facade and speaks normally, admitting he was simply trying to act cool. Under duress, Armored Gorilla is spineless, apologizing profusely and bargaining for his life by revealing information about his creator, Dr. Genus, and the House of Evolution. (Source: One Punch-Man Wikia)