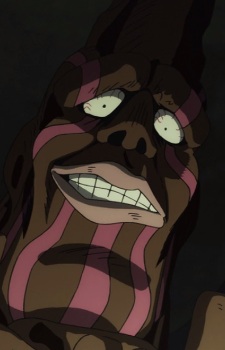 
Race: Artificial Mutant Gender: Male Abilities: Superhuman Strength, Superhuman Speed, Keen Instincts Level: Dragon Affiliation: House of Evolution Debut: Chapter 10/Episode 3 Ashura Kabuto was an artificial mutant created by Dr. Genus of the House of Evolution and is by far their strongest creation. Appearance: Ashura Kabuto is a massive being, towering over both Saitama and Genos. He is humanoid but his body has many characteristics resembling a beetle, including a thick exoskeleton and a large horn on his head, similar to that of a rhinoceros beetle. His body also has many large spikes on his arms and legs. Personality: Ashura Kabuto is an extremely unstable being. He is very intelligent, but has an insatiable blood lust and thus had to be locked up because he kept killing anything that got near him. He considers himself far superior to humans, calling himself a 'new human' that Dr. Genus was looking for, and believing that all should bow to his will. (Source: OnePunchMan Wikia)