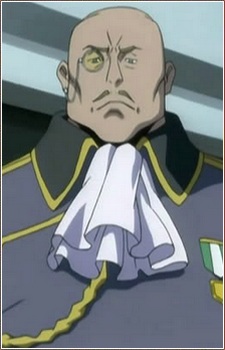 
Bartley Asprius is a large and balding Britannian general who commands the Code R research team. After the assassination of Clovis, he is stripped of his rank by Jeremiah and sent back to Britannia as a prisoner. He subsequently returns to the military under the command of Prince Schneizel. He oversees Jeremiah Gottwald's transformation into a cyborg and tries in vain to stop Jeremiah when he wakes up prematurely. After V.V. recruits Jeremiah, Bartley is ordered by the Emperor to help finish Jeremiah's modifications, which he does not seem happy about. After completing his task, he expresses the desire to leave, knowing that the Emperor's plans could mean the end of the world. During the Black Knights assault on the Geass Directorate stronghold, Bartley is killed in the attack. Before his demise he sees C.C. and laments to the deceased Prince Clovis that they should never have captured her. (Source: Wikipedia)