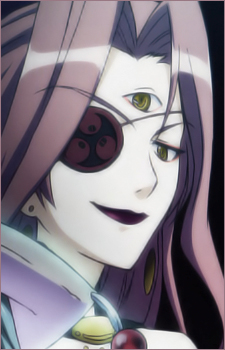 
One of the Trinity of the Bal Masqué, entitled as the "Strategist". Takes the form of a woman with three eyes, but has an eyepatch covering her right eye. A scheming character that would have no qualms in manipulating her unsuspecting subordinates and sending them to die. Apparently she also has a gift for engendering loyalty in her subordinates, such as Vine, as she is capable of inspiring them to perform obviously dangerous tasks on her behalf. Her strategic skills are balanced by a considerable aptitude for combat.