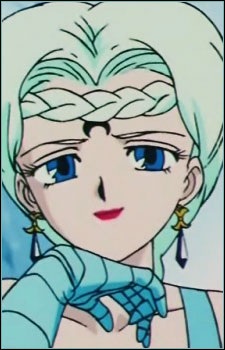 
Berthier (Bertie in the English versions though sometimes implied to be Birdy) is the second-youngest (youngest in the dub) sister. Her name is French, coming from the mineral berthierite, and is pronounced roughly as "BEAR-tyay." Her magical attack is called "Dark water" and she is a counterpart of Ami Mizuno. She fears Rubeus but has no love interest for him unlike her other sisters. In the manga, Berthier is given the mission "Code002, Operation Re-move" to kill the Sailor Senshi and capture Chibiusa. She disguises herself as a normal human and wows people with her dowsing abilities using a pendulum. When she sees Ami Mizuno find a leak in a pipe without using a pendulum, she deduces her identity as a Sailor Senshi. Skilled at chess, Berthier goes on television to challenge Ami to a chess match. At the match, she calls her "Sailor Mercury", and tries to use the Black Crystal to manipulate and capture her. A fight breaks out between Berthier, Mercury, Jupiter, and Moon, in which Berthier is shown to be powerful enough to deflect Mercury's Shine Snow Illusion attack. At the end, Berthier uses the water from a sewer to surround and choke Mercury, allowing Rubeus to abduct her. Berthier is then killed by Sailor Moon. In the anime, Berthier has a very darkly playful personality, but is shown to have great respect for all of her siblings. She is the only one shown to be upset when Cooan is purified by the Silver Crystal. Much like her counterpart in Ami, she is also a strategist and is incredibly talented at chess, though she apparently also cheats. On her final mission, Berthier plays a deadly game of chess with Sailor Mercury, but her plan to freeze them all fails when Petz and Calaveras arrive and tell her they will claim credit for her success regardless of what it means for her. Momentarily distracted, she loses her chance at the killing blow against Sailor Mercury when Tuxedo Mask arrives and rescues her and the other Sailor Senshi. Her two older sisters then abandon her as a failure. Distraught, Berthier decides she will sacrifice herself to kill the Sailor Senshi and uses all of her power ("Dark Water! Full Power!") in one final blizzard. However, a newly healed Cooan convinces her that she is still loved and has a second chance. Berthier relents in her suicidal gambit, and allows Sailor Moon to heal her. Later, she and Cooan, along with the Sailor Senshi, are able to convince their other two sisters to join them and become normal women.