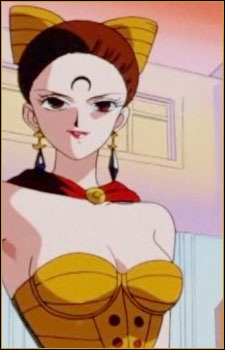 
Calaveras (Avery in the English versions) is the second-oldest of the sisters and has the ability, much like Tuxedo Mask, of communing with spirits of the dead. She uses the energy of her deceased sisters to attack Sailor Venus in the manga whom she fails to kidnap. She is named for the mineral calaverite, and is a counterpart of Minako Aino. She attacks with a whip similar to Venus' Love Me Chain attack, known as the "Dark Love Whip" according to the Sailor Moon R anime album and the Another Story Super Famicom RPG. Calaveras is the only sister in the manga who Rubeus appears to flirt with. In the manga, she is the last sister to appear, and her mission is "Code:004, Operation Re-birth." She is shown to have the power of channeling, and channels the spirit of Rubeus into Tokyo to brainwash the humans and change their allegiance from the White Moon to the Black Moon and to get them to destroy the Silver Crystal. When Sailor Venus confronts her at the channeling, Calaveras channels the three captive Sailor Senshi through Kotono, Asanuma, and Naru, as well as the spirits of her dead sisters, and has them use a Spirit Attack against Venus and holds her captive. However, because Rubeus was already injured by Tuxedo Mask, he is not able to collect Venus, and Calaveras is killed by Sailor Moon when she comes to rescue Venus. In the anime, Calaveras is shown to be a petty woman who indulges in relentlessly teasing her other siblings, especially Petz. She also appears unwilling to do anything for herself. She never accepts a single mission and instead tags along on several of Petz' missions and also follows Petz on one occasion to steal credit for Berthier's final mission. Even her final mission is one of Petz', in which the elder sister was asked to use a powerful stick to kill the Sailor Senshi and her now purified siblings Cooan and Berthier. While on the mission, Calaveras urges Petz to go ahead and kill the other two girls, but Petz, corrupted by the stick, decides to kill all three of them. Shocked by Petz's betrayal, Calaveras is shown pity by Sailor Moon and eventually comes to understand human love. She then tells the other Sailor Senshi about the stick's power. When Rubeus arrives and uses the stick to create a time-vacuum on the bridge, Calaveras stops Petz from falling into the vortex by catching her using her whip. After the Sailor Senshi destroy the stick, Calaveras accepts purification and becomes a normal human woman.