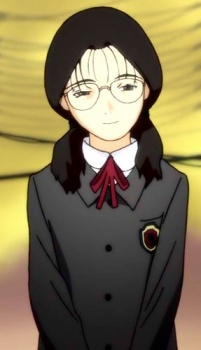 
Chisa Yomoda is Lain's classmate. She's the one that initially gets Lain involved with the Wired. She commits suicide at the beginning of the story and later contacts Lain from within the Wired saying "There was no reason for me to stay in the real world any longer. In the real world, it didn't matter if I was there or not. When I realized that, I was no longer afraid of losing my body".