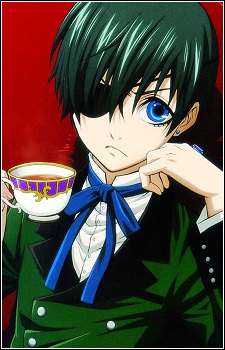 
Race: human demon (anime only) Status: alive Age: 12-13 Birthday: December 14, 1875 Zodiac: Sagittarius Hair: dark navy blue Eyes: purple (right), blue (left) Height: 152 cm (5") ~ 158 cm (5'2") Contract sign: right eye Affiliations: Phantomhive Family, Faustian Contract, Funtom Company Occupation: Earl of Phantomhive, Watchdog of the Queen Known relatives: Vincent Phantomhive (father, deceased), Rachel Phantomhive (mother, deceased), Angelina Durless (aunt, deceased), Frances Midford (aunt), Alexis Midford (uncle), Edward Midford (cousin), Elizabeth Midford (cousin, fiancée), Clause (uncle) The Phantomhive family has, for years, been well known for making toys and sweets for small children. However, they are also the Queen's watchdogs; the Phantomhive family keeps an eye on black market dealings in ways that Scotland Yard isn't able to. Ciel Phantomhive is the heir to this legacy. Earl Ciel Phantomhive is the business-savvy, twelve-year-old (later thirteen-year-old) head of the English Phantomhive noble family, taking over after the deaths of his parents, Lord Vincent and Lady Rachel Phantomhive. He also runs Funtom Company, which manufactures toys and sweets, and later adds a food branch after winning a Royal Warrant. His right eye, which is usually covered with a black eyepatch, bears a pentacle sign of the Faustian contract which binds the demon Sebastian Michaelis to his will. He also has a brand burnt into his back from when he was sold as a slave after his house was burnt down. Ciel is engaged to his cousin, Elizabeth Midford. He sees her as an important friend and someone he needs to protect. His parents were killed and his mansion was set ablaze on his birthday, a reason why he does not like to celebrate the occasion. This tragedy causes him to not want to lose anyone important again. Despite his young age, he runs the family company and, as such, is quite busy much of the time though he still finds time to go out investigating dubious legal matters. Throughout the series Ciel's height has been used as a tool of mockery due to his short stature. He grows by 6 cm in the second season, but still remains shorter than the other characters, thus continuing the comical relief. Sebastian enjoys teasing Ciel about this fact. In the manga, he does not grow taller. The young earl is far more composed and mature than would be expected. He remains distant from others, aloof, preferring to spend his time on work for the company. He is oftentimes selfish and not able to fully empathize with people. However, he does express occasional concern for the well-being of those close to him. As a side note, Ciel seems to enjoy drinking tea a lot (he is adept at distinguishing between them as well) and sweet desserts. He has asthma (inherited from his mother) and dislikes being around cats because they trigger his allergies. (Source: Wikipedia)