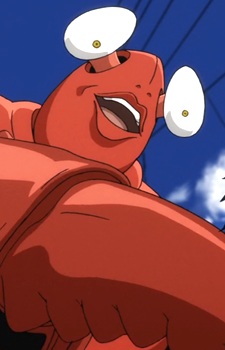 
Race: Mysterious Being Gender: Male Abilities: Weapons; Claw Hands Level: Tiger Debut: Chapter 2/Episode 1 Crabrante is a Mysterious Being which was created when a man ate too much crab and underwent metamorphosis. Appearance: Crabrante is a large creature with large, crablike claws and a hard, bright red carapace covering his upper body, while his lower body is that of a muscular human male, naked except for a pair of white briefs. He has two nostrils on his flat face, a cartoonishly large mouth, and two eye stalks that protrude from the sides of his head, ending in large, elliptical eyes with small pupils. Personality: Crabrante seems to have turned into a bloodthirsty monster after his transformation, killing several people on his search to kill a boy who vandalized his body with permanent marker. He is proud of his "beautiful body" and turns very aggressive when anyone defiles it. He did, however show compassion to a depressed, pre-training Saitama, saying that he would not harm someone with his own lifeless eyes. When talking, he occasionally adds 'Blubblub' and 'lol' to the beginning and the end of his sentences. (Source: OnePunchMan Wikia)