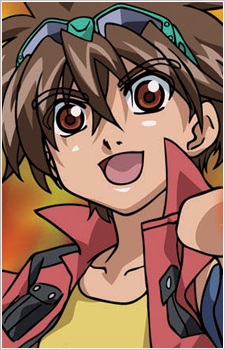 
While brawling, the leader of the Battle Brawlers Dan unleashes the power of Pyrus Dragonoid and is sucked into an alternate dimension causing a break in the balance of both worlds and possibly the end to all humanity. Dan is a boy who really loves Bakugan, but gets frustrated easily. His greatest ambition is to be the number one brawler in the world, which is what he attends at the last episode of Bakugan Battle Brawlers. He tends to act rash and impulsive which often leads him to trouble. He is very eager for a brawl, thinking he can take on anyone, which causes him to complain a lot when he has to wait around in hiding, as shown in the first and second season. By the third season Dan has outgrown that habit as he was telling Jake to help rebuild the second shield generator after they had a successful victory over the Gundalians. Dan used to play using raw power without any kind of strategy, often caring more about winning and not the consequences to come. This attitude is what caused him and Drago to get into a fight which ended with Dan throwing Drago in the river. After losing a battle to Ryo and reuniting with Drago, Dan learned that there's more to Bakugan than just power. Because of this Dan was able to come up with a strategy to defeat Ryo in a rematch. After that experience, Dan started using a little more strategy in his battles. Through one of his strategies he was able to defeat Chan Lee, the third ranked Bakugan player. In episode 1, When Dan first appears he is seen riding his bike to the park, where he is supposed to battle Shuji. He managed to defeat him with ease. Later he is then challenged to a rematch, which he accepts. Dan's surprise at seeing Shuji wield a Darkus Bakugan put him at a slight disadvantage. However, this didn't stop him from fighting back. During the near end of the battle Dan has a vision of Drago fighting with Fear Ripper and Drago tries to make him stop fighting with him. After the vision was over, Drago and Fear Ripper appeared in the field and Drago was able to defeat him, giving Dan the victory. Dan was surprised hearing Drago talking to Fear Ripper and he decides that he was imagining that he was talking. In Bakugan Battle Brawlers: New Vestroia, Dan, now 15 years old, is reunited with Drago, after he was separated from the Perfect Core with the help of the Legendary Soldiers of Vestroia. Drago took him and unknown to their knowledge, Marucho, to New Vestroia, where they met up with Mira, Ace, and Baron. While Mira and Baron were accepting of him, Ace wanted him to prove himself in a brawl, which ended in a draw. He has agreed to help the Resistance free the Bakugan by destroying all the Dimension Controllers that are keeping the Bakugan in their ball forms. Dan is still the main character of the third season of Bakugan, Gundalian Invaders. His Guardian Bakugan is still Helix Dragonoid, and he has the Battle Gear JetKor. He has just moved to a new town and made friends with Jake Vallory, their new Subterra brawler. Dan brings Jake to Bakugan Interspace and brawls against Ren Krawler, but the battle gets cut off when the power levels become too high for Bakugan Interspace. He and Marucho battle two "Neathians" (really Gundalian), Sid Arcale and Lena Isis. Marucho lost, but Dan and Drago beat both of them. In their first encounter, Fabia Sheen accidentally throws Dan. To see if he was the one who picked up her Phantom Data, she brawls Dan, and loses. Believing Ren Krawler's story about the Neathians attacking Gundalia, Dan tells Fabia to leave and to stop using Bakugans for war. Angered by his ignorance, Fabia throws Dan and leaves. One year after defeating Barodius, Dan and Drago have returned to Bakugan Interspace and it has expanded. Two rival teams, Team Anubias and Team Sellon have emerged and are trying to challenge the Brawlers' status as top-ranked battlers. Also, Dan and Drago have been having visions of a masked man named Mag Mel and a Bakugan named Razenoid demanding that they give him their power. The next day, Dan is challenged by one of the members of Team Anubias, Ben. Dan manages to defeat him, but Drago loses control of his powers and nearly destroys the arena.