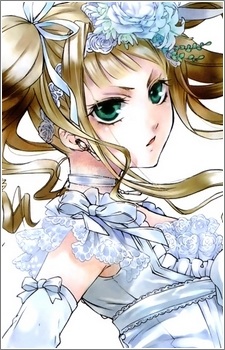 
Age: 13-14 years Height: 157 cm (5'2") - 162 cm (5'3") (Season 2) Elizabeth (who demands to be called by the more affectionate "Lizzie") is Ciel's cousin, the daughter of Ciel's father's sister, Frances, and her husband, Marquis Midford. She's also his fiancee. Lizzie has known Ciel since childhood, and the two appear to have been very close. Despite this childhood connection, though, Ciel has not told her the circumstances of his parents' deaths and his own disappearance. Lizzie takes this in stride, not pestering him for information and continues to attempt to restore the close friendship. She ran away from home to see Ciel at least once, in spite of her mother's fearsome personality-- she may just be the only person in the series not at all terrified of the Marchioness. Although she is Ciel's fiancee, this knowledge seems to be relatively secret; certainly no enemies of Ciel's have yet tried using her against him, despite the fact that he cares deeply for her (as evidenced by the fact that he throws himself in front of an attacking bear to keep her safe). Lizzie is strong-willed and cheerful, with a fondness for cute things. Her hobby, much to Ciel's chagrin, is to make everything and everybody "cute"; this involves everything from decorating the mansion with hearts and sparkly bunnies to putting old men in dresses ("just like Marie Antoinette!"). Even though she's forceful and refuses to take no for an answer, on the occasions when she goes too far and upsets someone, she feels horrible and will even cry over her mistake. Most importantly, despite her unrealistic fantasy of her and Ciel in a fairytale-esque relationship, she does care about him quite a lot. She simply hasn't yet figured out the best way to express her affection. In the manga, Lizzie is shown to be an excellent swordswoman. Ciel was unaware of Lizzie's skills because she wanted to be seen as "cute" and fighting does the opposite, so she hid her talent. The reason why Lizzie knows how to fight is because her father, Marquis Alexis Midford, is the head of the British knights. Her father, mother and brother also all know how to wield a sword, and she carries on the family tradition. Due to her great skill she takes a decision to protect Ciel for the first time and she is the one who ends up saving Ciel in the ship Campania from a massive attack of Bizarre dolls that she kills all before the eyes of a surprised Ciel and Sebastian. She even threatens Grell with her sword but it is stopped by Sebastian who apologizes to her for making her fight. It is also shown that she does not wear highheels so she doesnt get taller than Ciel, and she is willing to make any sacrifice for him.