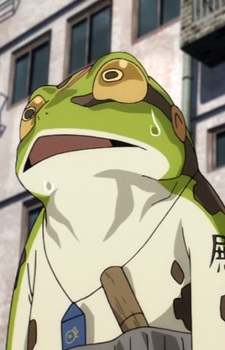 
Race: Artificial Mutant Gender: Male Abilities: Weapns; Wakizashi Level: Tiger Affiliation: House of Evolution Debut: Chapter 7/Episode 2 Frog-Man was an artificial mutant created by Dr. Genus of the House of Evolution. Appearance: Frog-Man is a humanoid frog. He has large eyes, a white stomach and throat, black spots on his back and arms, and a scar that runs across his face. He wears a wide belt with a tanto stuck through it, black pants, sandals, a pendant necklace and has a kanji tattoo on his left shoulder. Overall, his appearance is that of a yakuza underling. Personality: Nothing is known about Frog-Man's personality due to his quick defeat by Saitama and eventual death at the hands of Beast King. (Source: OnePunchMan Wikia)