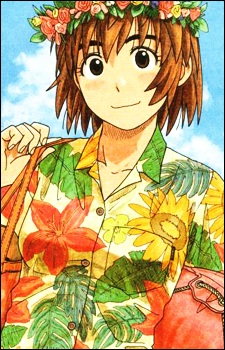 
The middle Ayase sister, Fuka (also romanized as Fuuka) is 16 years old and in her second year at a local high school. She is the most responsible of the sisters, and during Yotsuba's first visit to her school, one student calls her "vice-president." She finds herself frequently helping the Koiwais, even though she does not intend to and is more flustered by their eccentricities than anyone else. Fuuka is often teased by the other characters, especially about her fashion sense and sense of humor. She is fond of making bad puns, which irritates Asagi, and wearing shirts with odd or interesting graphics (such as Chiyo's "father" from Azumanga Daioh, who also appears as a plushie in her room). (Source: Wikipedia)