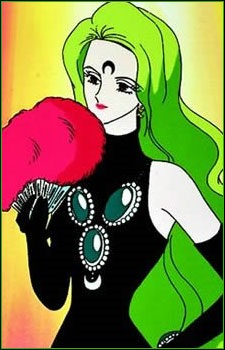 
Green Esmeraude (known as Emerald in the English dub) is the second of the Black Moon Clan to appear. She is a selfish and vain woman who tries to emanate a goddess-like appearance by wearing an elegant, tight-fitting dress along with opera-length gloves and knee-high stiletto boots. She has a very distinctive laugh that is extremely loud and piercing, and is generally the most comedic member of the Black Moon. In the anime, Esmeraude is the successor to Rubeus, deliberately passing up the chance to save his life from an exploding spaceship. She is completely infatuated with Prince Demand, who is obsessed with Sailor Moon. Consumed by her jealousy and greed, Esmeraude goes to Wiseman with the desire to have Demand and ruin Sailor Moon. He presents her with a magical tiara which, he claims, will make her the queen of Neo-Tokyo. Suspecting a catch, she accepts the gift and is instantly transformed into a 'queen'. Her power increases and she believes Demand will be all hers. She then becomes overwhelmed by the dark powers and changes into an evil dragon. She immediately proceeds to attack the Crystal Palace while the Sailor Senshi face her, unaware that the monster is Esmeraude. She attacks, but at the last moment, Sailor Moon fires an attack at the dragon, defeating it. Esmeraude briefly reappears as the queen she wanted to be, surrounded by a heavenly glow, but a dark void opens up underneath her. Unable to save herself, Esmeraude slips into the dark vortex, and vanishes into nothingness while reaching her hand outward. She whispers Demand's name after her disappearance. In the manga, Esmeraude's obsession with Demand still exists. After failing to kill the Sailor Senshi using her subordinates Chiral and Achiral, she attacks Chibiusa in the 30th century, after taking off her gloves to reveal her monster-like hands. After trying to strangle Chibiusa, she is briefly stopped by Sailor Venus. Sailor Moon attempts to use Moon Princess Halation on Esmeraude, but it doesn't work. Esmeraude then proceeds to use her now multiple hands to strangle Sailor Moon, Sailor Venus, and Tuxedo Mask. When King Endymion's spirit appears behind Tuxedo Mask, allowing him to use Tuxedo La Smoking Bomber, Tuxedo Mask uses his new power to kill Esmeraude, freeing the other two Sailor Senshi.