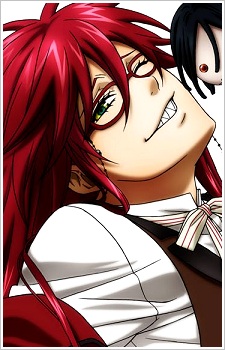 
Height: 175cm (5'9") As Madam Red's ineffectual butler, Grell tends to hang around the edges of the scene, fretting over the socially-unacceptable things that Grell's mistress continually gets up to. When something is not up to Madam Red's exacting standards, she takes it out on Grell whether or not it's actually Grell's fault. Grell's tea is said to be far inferior to Sebastian's. Meek, easily scandalized, and highly nervous, Grell's personality is entirely at odds with Grell's mistress'. As a result, the other characters tend to either ignore or walk all over Grell. However, this mild personality is entirely a facade. Grell's true identity is that of a death god; one with a true personality just as flamboyant as Madam Red's, perhaps even more so. The real Grell is a cheerful sadist who enjoys flirting and bloody murder, sometimes at the same time. Grell meets Madam Red during a night where she murders one of her patients, and is attracted to her—both because their favorite color is red and because of their issues regarding childbirth. Grell uses feminine pronouns and has more than a passing interest in Sebastian; at one point Grell compares the two of them to Romeo and Juliet during their battle (leaving Sebastian horrified). Though having an interest in Sebastian, it was stated that Grell's 'true love' is William. Overall, Grell appears to have a tenuous grasp on sanity at best, switching from childish irritation to murderous rage at the drop of a hat. Like a typical death god, Grell possesses a scythe; however, Grell had it transformed into a chainsaw because Grell considered a regular scythe to be old-fashioned. Grell explains that the scythe is capable of cutting through anything; when it cuts through a person, it divides their soul and their memories, thus resulting in that person's memories playing before their eyes.