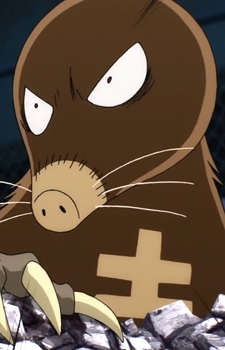 
Race: Artificial Mutant Gender: Male Abilities: Weapon's; Mole Hands Level: Tiger Affiliation: House of Evolution Debut: Chapter 8/Episode 2 Ground Dragon was an artificial mutant created by Dr. Genus of the House of Evolution. Appearance: Ground Dragon is a large black mole with a white pattern in the form of Kanji that spells out "ground dragon." His only other distinctive feature is his large claws. Personality: Not much is known about Ground Dragon's personality, due to his quick death at the hands of Saitama. (Source: OnePunchMan Wikia)