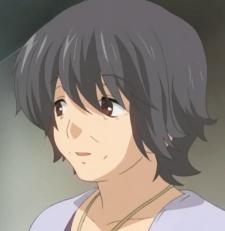 
The Furukawas' elderly neighbour. Even though she does not debut until Two Shadows, her name is mentioned as early as The Scenery With a Carving, when Fuko coincidentally took her last name as her false last name. She later makes a cameo in Two Shadows, when she attends the school festival and watches Nagisa's play with Sanae. In the ~After Story~ episode Disagreeing Hearts, a disguised Sanae takes the name Sanako Isogai as her false name while she pretends to be Youhei's girlfriend. In The Promised Founder's Festival, the real Isogai tells Tomoya that the neighbourhoods finds Akio and Sanae running out of the store entertaining. (Source: Clannad Wiki)