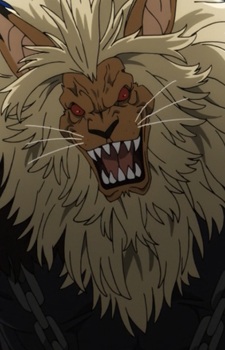 
Race: Artificial Mutant Gender: Male Abilities: Immense Strength, Transformation, Weapons; Lion Claws Level: Demon Affiliation: House of Evolution Debut: Chapter 8/Episode 2 Beast King was an artificial mutant created by Dr. Genus of the House of Evolution. Beast King is the leader of Dr. Genus' strike force and second-strongest specimen in the House of Evolution, exceeded only by Carnage Kabuto. Appearance: Beast King is a large, humanoid lion, with a full mane and tail. In spite of his humanoid, five-digit hands, he still wields sharp claws on his fingers and padded, four-toed feet. He wears a black shirt, animal furs on his shoulders, and a leopard-skin cloth around his waist, secured by heavy chains and a belt with a lion-head buckle. There are bracelets on both his wrists and ankles, and bracers on both biceps, which he breaks and shatters once enraged. Personality: Beast King speaks very loudly, roaring and shouting his dialogue constantly. Although only the second-strongest, Beast King revels in his own power, and becomes increasingly frustrated with Saitama's inexplicable strength and absence of fear. As a leader, he is sadistic and has little regard for his fellow mutants, dismissing his killings of Slugerous and Frog Man as the 'law of the jungle'. (Source: OnePunchMan Wikia)