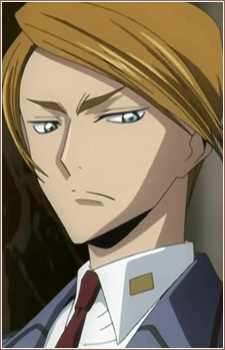 
One of the members of the Imperial Army. He belongs to the Purist faction in the military and stood by Jeremiah's side in scapegoating Suzaku Kururugi. After the first appearance of Zero and Jeremiah's incomprehensible actions that lead to the escape of the terrorists with Suzaku, he led the rest of the Purist officers in an unsuccessful attempt at killing Jeremiah. He finally meets his end at the hand of the Guren Mark II piloted by Kallen when his knightmare's ejection seat fails him. (Source: Wikipedia)