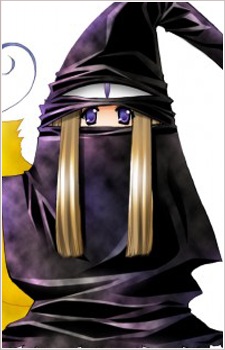 
Kogechibi lives in the library, and looks like a four-inch (102 mm) -tall Eve, though with different colored eyes. "Koge" refers to the one-eyed cloak that covers all of her but the eyes. In the game, when the main character is occupying "Koge", the girl is referred to as "O-chibi-chan" ("o" being an honorific and "chan" an endearment). Kogechibi's vocabulary is composed of unintellible sounds akin to baby talk. In the anime, she has a disturbing love of fireworks and can say a few words if they have something to do with explosives; she builds miniature catapults and launch platforms, and fills hollow fountain pens with gunpowder and uses them as bottle rockets. She plays a small part in the plot, but is mostly comic relief in the anime. In the game, it is revealed that the guardians "fragment" when they overexert themselves, and that the fragments take on a life of their own. Kogechibi is a fragment of Eve.