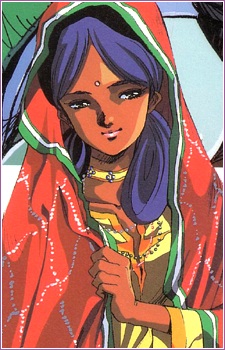 
Age: 17 Born: November 21, 0062 U.C. Nationality: India Lalah is a young woman who is the "star student" of Professor Flanagan due to her strong Newtype abilities, and as such is also one of the key test subjects in the development of Newtype-related weaponry. Being one of the earliest and most successful known Newtypes, her powers are accompanied by a profound spiritual awareness. Despite her gentle nature, Lalah is fiercely loyal to the man who saved her life —- Char Aznable, the scheming "Red Comet", who found her in an Indian brothel where she worked after losing her parents in the war. She was assigned to pilot the Newtype use mobile armor MAN-08 Elmeth as a part of the Newtype research project conducted by the Flanagan Institute. Lalah is ranked as an ensign under Char. Lalah and Amuro Ray first met on Side 6, where Amuro found Lalah in front of a lakeside house. They spoke briefly and Amuro was attracted to her with his Newtype powers. They met again some time later when Amuro's car got stuck in the mud. Another vehicle pulled over and offered to help him, aboard it was Lalah and Char Aznable, Amuro's archrival (the two had not yet seen each other face to face). Amuro immediately recognised both of them, but Char and Lalah had yet to figure out Amuro's identity. Lalah left a profound impact on Amuro and was considered his first great love. During the Elmeth's test run which saw its Newtype "bits" weaponry wreak havoc on the Federal Fleet guarding the newly-captured Zeon base Solomon, Amuro in the Gundam engaged the Elmeth but found out the pilot was Lalah. Both then realized they were soulmates and shared a "Newtype bonding", a sort of telepathic bond. Unfortunately Char arrived and chastised Lalah for "consorting with the enemy" and raised his beam naginata to strike down Amuro's wingman Sayla Mass, piloting the CoreBooster jet. Lalah told Char to stop, for she sensed the pilot was Char's sister Artesia (Sayla Mass is her adopted name since young). Char hesitated but this gave Amuro the opportunity to sever the weapon arm of Char's Gelgoog, rendering it incapacitated. Amuro went for the killing blow but Lalah knocked away Char and took the fatal strike. This has a profound effect on both men, as their rivalry escalates from a professional to a very personal one which culminated in the movie Char's Counterattack. Although she died before the end of the One Year War, Lalah Sune's spirit occasionally returns from beyond the grave to haunt both Char and Amuro Ray, as seen in Char's Counterattack.