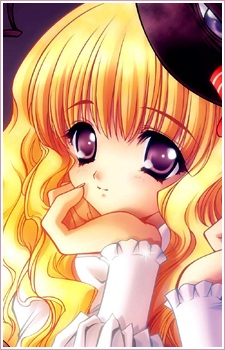 
Lilith is the guardian of the library. She is the third Yami, after Adam, the creator of all the worlds, and Eve. In the anime, Lilith is attracted to Hazuki and flirts relentlessly, though she is always turned down. Lilith appears to dislike Eve and have interest only in her own ends, but her kind and vulnerable sides are sometimes shown, especially when she encounters children in trouble; adults do not seem to move her to compassion as much. Her more childish mannerisms are fairly constant, but Lilith sometimes shows considerable wisdom and knowledge. She claims that Eve left the duty of being Yami and went off to play in the book worlds, and so she wants to find Eve and return her to the library. Towards the end of the game, it is shown that Lilith misses the past, when she was close with Eve and Adam, or "Yami Yama". In the game, Lilith uses the main character's love for the wayward guardian to find Eve, and in the anime she uses Hazuki. At the end of the game, Lilith may either fall in love with the main character, or continue to pine for Yami Yama. In the anime, Lilith is attracted by (and flirts with) both men and women, though she never develops any deep romantic relationships. At the end of the anime, it may be suggested that Lilith and Eve share a sexual relationship from time to time.