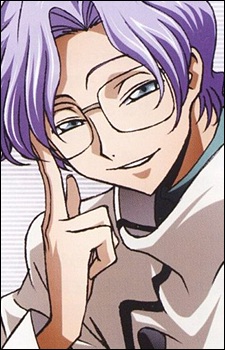 
Age: 29 (first season) 30 (second season) Birthday: February 2 Blood type: AB Lloyd Asplund is an earl of the Britannian nobility and the developer of the elite Knightmare Frame Lancelot. To keep from being reminded of the fragility of human lives and friendship, Lloyd immerses himself in science and has come to view people as nothing more than tools — he regards Suzaku, for example, as a mere component of the machine that he pilots. He has a tendency to mock others and is often rebuked for this behavior by Cécile Croomy, his assistant. Prior to joining the military, he attended the Imperial Colchester Institute. Lloyd's research organization, Camelot is an irregular division of the Britannian Military and has been granted permission by Prince Schneizel to operate outside the command structure and regulations of the regular Britannian armed forces. Rakshata refers to Lloyd as the Earl of Pudding, as pudding is his favorite food. He is engaged to wed Milly Ashford in the first season, having agreed to the union mostly in hope that he might obtain the designs of the Knightmare Frame Ganymede. As such, he is forced into doing nice things for her by Suzaku, though Milly breaks off the engagement after she graduates.