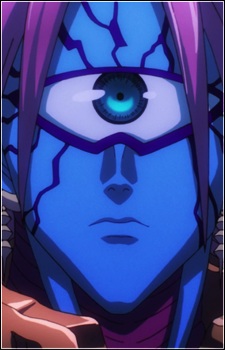 
Race: Alien Gender: Male Abilities: Immense Strength, Speed, Durability, Energy Projection, Regeneration Occupation: Alien Invader (Leader) Level: Dragon+ Affiliation: Dark Matter Thieves Debut: Chapter 32/Episode 10 Lord Boros is the leader of the Dark Matter Thieves, a group of alien invaders who attacked and destroyed A-City. Appearance: Lord Boros is a slim, cyclopean alien with lightly colored spiky hair and pointed ears, which are adorned with multiple earrings. His face is covered with crack-shaped markings that start from his eye(and cover most of his body presumably). In the area of his body below his chest, there seems to be another eye, which moves in synced with his original one. At first, he is seen wearing a full body armour that suppresses his powers. When the armour is broken by Saitama's punch, he attains a more intimidating and slightly more muscular build, while his skin darkens in colour, parts of his body grow scales and spikes, and his markings start emitting energy, and gain a lighter colour. In his Meteoric Burst form, his appearance changes drastically. His hair grow reaching his back, his eye's sclera becomes black, and his body becomes engulfed in energy, while his markings now return to their original, dark colour. Personality: Thanks to his amazing powers, Boros is both arrogant and prideful. Due to his love of battles and inability to find any opponent who has been able to match him in power, he roams the universe looking for worthy opponents that would be stand against him. He met a prophet that revealed to him that in a far off planet he would finally find a strong opponent that would be able to fight on par with him, giving Boros the enjoyable fight he had always desired. (Source: One Punch Man Wikia)