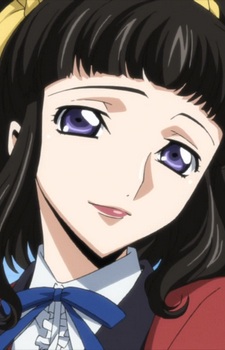 
Date of Birth: November 22, 1979 a.t.b. Nationality: Britannian Blood type: B Age: 30 (at the time of her "death"), 39 (at R2) Date of Death: 2018 a.t.b. (2009 at the time of her "death") Marianne Vi Britannia was the 5th wife of the Emperor of Britannia and the mother of Lelouch and Nunnally. The surname Lamperouge presently assumed by Lelouch was her maiden name. Her commoner status by birth caused her to earn the jealousy of other imperial wives and nobles, which Lelouch suspects had resulted in her murder. Lelouch's investigation revealed, however, that several members of the Imperial House not related to her by blood respected and admired Empress Marianne, such as Clovis, Euphemia, especially Cornelia, who idolized her and put a lot of fruitless effort into investigating the assassination. It is hinted that her supporters were the Ashford family, which explains why their social statuses were ruined after her death and why they consented to protect Lelouch and Nunnally. She had also piloted one of the earliest Knightmare Frames, the Ganymede, which was developed by the Ashford family and is well known for her superior Knightmare Frame piloting skills, hence the nickname, "Marianne the Flash." In episode 23, it is revealed that C.C has apparently been talking to Marianne herself, via an unknown method. In episode 7 of R2, C.C. was talking with Marianne again. At the end of season one,Lelouch, by questioning Cornelia, discovers that Marianne had ordered Cornelia to shut down the security on the day of her attack, implying that she knew about the attack beforehand. She is known to have shielded Nunnally during the attack that took her life, however, Nunnally's legs were disabled and she lost her sight. It is also to be noted that her death greatly affected and changes the life of Lelouch, who went on a great length to avenge her death and formed the resolution to create a new world where Nunnally can live in peace. Because of her death, little is known about Marianne as a person; the side materials paint her as a sweet, kind-hearted woman, albeit one with a rebellious spirit and a deep protective instinct towards her children. Lelouch himself alludes to two such instances, one where she rode a horse into the palace's great hall, and another where she picked a fight with several of the Emperor's other wives all at once. In a flashback from one of the novels, she uses the Ganymede to intimidate a fellow consort who had been cruelly harassing Lelouch and Nunnally - all while maintaining a cheery, motherly disposition with a warm smile on her face. Marianne's conversations with C.C., one-sided in the anime but scripted out by the staff (and actually revealed in the Nintendo DS game), show that she has a playful side, often teasing C.C. when the immortal girl tries to deny any sort of attachment to Lelouch.