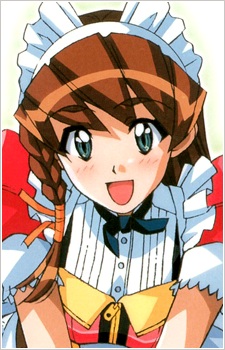 
Kazuya receives May, a hand sized 1/6th scale cyberdoll, in a package from Cyberdyne Co. (not to be confused with The Terminator's robotic company, Cyberdyne Systems) because of an accidental order which happened as a result of a revenge tactic planted in a CD from his rival, Nanbara. A cyberdoll, May was never paid for by Kazuya. Cyberdolls can control traffic lights and simple electronics and connect to personal computers via what may or may not be USB cables. She later becomes a human-sized 17-year-old version (Type G-99(D)-JPS). Her personality is innocent, and at times childish and naive, though she also shows surprising insight and is always able to cheer Kazuya up. Unlike the other Cyberdolls, May's Maid Program had evolved, making her more human and resistant to the retro-cybervirus that threatened the other Cyberdolls. She shows strong feelings of affection toward Kazuya and is often competing with Kasumi. In the last episode it has also been stated that she can give birth. (Source: Wikipedia)