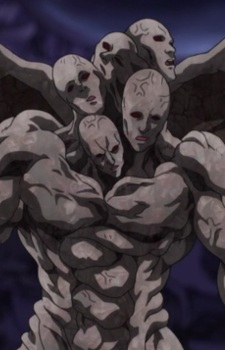 
Race: Alien Abilities: Super Strength, Super Speed, Agility, Shape-Shifting. Body Separation, Regeneration Occupation: Alien Invader Level: Dragon Affiliation: Dark Matter Thieves Debut: Chapter 31/Episode 10 Melzalgald was one of the Alien Invaders who attacked A-City. Appearance: Melzalgald is a rather frightening alien. Its body is large and able to change shape. Melzalgald has multiple heads, each of which is able to separate and form its own body. Each head has a small, marble-sized orb inside of it which allows him to regenerate; without it, the head dies. Personality: Each head possesses a different personality and speech pattern. One head speaks only in broken, simplified language. Another repeatedly praises the other heads, calling every suggestion by other heads a "good idea." One head is analytic and observant of its surroundings and the creatures within it. One of the heads is violent and constantly suggests killing anything opposing it. The last head is somewhat in charge of the other ones, taking action based on the other heads' suggestions. It should be noted that as the number of heads decreases, the remaining heads become somewhat more intelligent in speech pattern. Intelligence and personality traits may be divided amongst the heads. (Source: One-Punch Man Wikia)