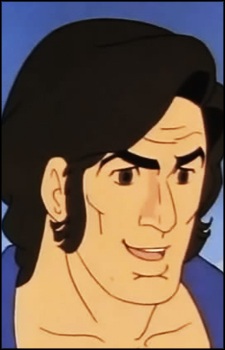 
Mendoza sailed the sees with the great Spanish explorer, Ferdinand Magellan, from whom he learnt the skills of Navigation. On one trip during a storm he saw a sinking ship with a man and his infant son (Esteban) he dived in and rescued the baby before the ship went down. Mendoza saw the child has a Medallion and he took the central piece. He took the boy to Barcelona and Esteban didn't know that is was Mendoza who saved him. Mendoza returned to Barcelona one day and offered to take Esteban to search for the Cities of Gold, because he thought he has a link with them. Mendoza is very clever and cunning, he tends to talk his way out of situations, even when every one thinks he is no longer needed a situation comes up and he uses his cunning to take control. He is brave and will go to any lengths to rescue his friends from trouble. He kidnapped Zia from the Queen of Spain, because she could read the Quipu and he believed that she could lead the way to the cities of gold. Only Esteban trust Mendoza for some reason, Zia on the other hand believes he is just after gold which at first is right but his character changes at the end and he starts to think of them than just links to the Citys of Gold.