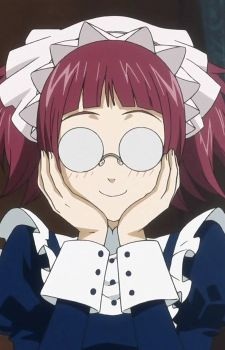 
Height: 165 cm (5'5") The glasses wearing maid of the Phantomhive household. Mey-Rin is enthusiastic about her job, but extremely bad at it (her main fault being clumsy.) She adds too much soap while washing clothes, trips and shatters the good china, and is generally a gigantic klutz. When asked to do an important task, she stutters and panics, which only adds to her natural clumsiness. She owns a pair of glasses that do nothing to improve her clumsiness. However, she refuses to purchase a new pair as they are the first thing Ciel bought for her. It's implied that she has a crush on Sebastian as she is even clumsier when Sebastian is watching. Her glasses cover up her eyes and her maid outfit doesn't show the fact that Mey-Rin is actually quite pretty. In episode 21 of the anime, it was indicated that Meilin was previously an assassin before Sebastian took her in as the maid of Phantomhive household. She used to be a sniper who did not use a scope, due to her sharp far-sighted vision caused by her ill-fitting glasses. She is also physically fit as she can use a sniper rifle like a hand gun and keeps hundreds loaded at once to decrease reload time. It was also revealed in chapter 33 of the manga that she has the same background. (Source: Wikipedia) Her name written in Romaji is Meirin.