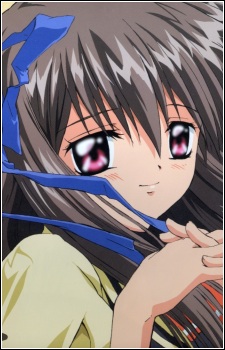 
Age: 15 Birthday: December 22 Zodiac sign: Sagittarius Hair color: brown Eye color: reddish pink Height: 169 cm Weight: 48 kg BWH: 85-58-84 Blood type: A Relations: Michiru (younger sister) Likes: Astronomy Minagi Toono is a smart girl who is the top student in all her classes at school; however, she is very shy, with Michiru as her only friend. One of the things Minagi enjoys the most is studying the stars at night. Together, her and Michiru created the Astronomy Club, which she forces Yukito to join. Minagi's mother and father are separated, with her mother living at home and her father away on business as a train conductor. Yukito finds out from Hijiri, the local doctor, that Minagi's mother has a mental illness caused by the miscarriage of her second child. When Yukito goes to see Minagi at her house, her mother appears calling Minagi, "Michiru"—the name she would have called her miscarried child. It is explained that Minagi was closer to her father than her mother, and because of her mother's wish that her next child be closer to her, she has delusions that Michiru was born and Minagi never existed. When Minagi talks to Yukito, she talks of her desire to leave, prompting Yukito to take her with him on his journey. However, when they walk to her house, Minagi's mother sees them, causing her memories of the miscarriage return and her delusions to end. With her mother's illness gone, Minagi invites Michiru to dinner, and her mother is surprised at the coincidence of her friend's name being the same as her miscarried daughter. Soon after, Minagi and Yukito go to the school roof where they find Michiru. She explains that she was a wandering spirit who came down to Earth because she saw a sad girl that she wished to make happy. Now that Minagi is happy, she has to leave. Michiru then vanishes. When Minagi gets home, she is given a letter from her father, explaining that he has re-married and new wife has given birth to a little girl. When Minagi goes to visit, she finds that the daughter is named, and looks exactly like, Michiru. [Written by MAL Rewrite]