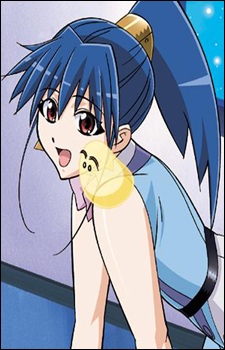 
Misty Cornwell is a new female character rescued by the crew at the beginning of the second season of Vandread. She was a young blue-haired woman found inside a human-sized pod who was rescued after a short scuffle between the Nirvana and several Harvester units. Unlike the girls of Mejare, Misty is from the planet Pluto, in the same solar system the Earth is located. As such, she is well-knowledged in the old-fashioned ideals about men and women, such as the typical boyfriend/girlfriend relationship, which confuses the others and makes Dita feel jealous. Like Dita, Misty is an excellent cook and uses her knowledge of men along with that to her advantage. Though she later gives up on trying to develop a relationship with Hibiki, she does allow Dita to realize her present, romantic feelings for Hibiki. She is Voiced By Moyu Arashima [Japanese], Lia Sargent [English], & Katherine "Teng" Perez Masilungan in Filipino dub. (Source: Wikipedia & Vanguard credits)