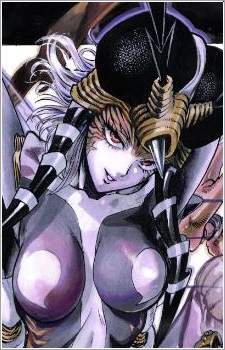 
Race: Artificial Mutant Gender: Female Abilities: Flight, Superhuman Speed, Superhuman Power, Mosquito Control, Regeneration, Transformation, Weapons; Horns and Claws Occupation: Monster Level: Demon Affiliation: House of Evolution Debut: Chapter 5/Episode 2 Mosquito Girl is a prototype artificial mutant created by Dr. Genus of the House of Evolution. As a hybrid between human and mosquito, she has control over large swarms of the insects, using them to collect blood as sustenance or repair any bodily damage. Appearance: Being partly insect, Mosquito Girl's body is largely exoskeleton, and light enough to allow winged flight. All her limbs are extended and end in twin hooks, and her lower legs are digitigrade, with extra forelegs. Her biceps and shins and covered in long bristles, and striped akin to a hornet's. Beyond her long hair and distinctly human face, her head resembles a mosquito's, including a second pair of compound eyes, two sets of antennae, and a shortened proboscis. Despite having a lower body, she still carries a banded abdomen from the small of her back. Following her transformation, the banded stripes on her body become jagged and more pronounced, while her bristles and mosquito headpiece transform into sharp spines. Personality: In spite of her human features, Mosquito Girl playfully regards humans and animals as prey, and constantly craves their blood. Contrastingly, she treats her mosquitoes maternally, referring to them as "little ones" and incorporating them into her attacks. Even in the face of danger, she is arrogant and only mildly irritated, insulting her opponents as much as assaulting them. (Source: OnePunchMan Wikia)