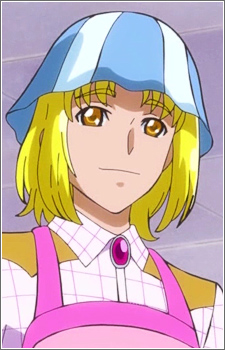 
A mysterious shopkeeper who gave Mana, Rikka, and Alice their Cure Lovies. After first being seen at the Clover Tower, where he had a traveling shop, he opens the Solitaire antique shop in Ougai near The Pig's Tail. He seems to know something about Pretty Cures and Trump Kingdom, however, he always plays dumb when questioned about it. In episode 17, he reveals himself to be Jonathan Klondike, a warrior from the Trump Kingdom who is Marie's fiancé. (Source: Wikipedia)