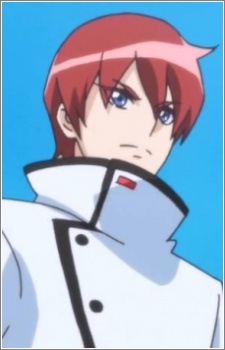 
Phantom is one of the generals of the Phantom Empire. He is also known as the "Pretty Cure Hunter" and is a elite and extremely loyal general to Queen Mirage. He is the fourth general to attack the Cures. When he merged with Megumi's shadow, he transformed into Cure Unlovely, the girl version of himself and dark version of Cure Lovely. In episode 41, it was revealed that he was once Cure Mirage's fairy partner before she became evil. Phantom is introduced as a man with pale skin, dark blue eyes and short, dull mahogany hair, and wears a long white coat. He appears to wield a sword and has a red gauntlet-like contraption on his left arm. As Cure Unlovely, her hair was at the same length and style as Cure Lovely's. She also had a similar-looking hair accessory. She wore a red and black outfit that look similar to Phantom's coat with long gloves and boots. As a fairy, Phantom looks similar to Ribbon and Glasan but with grey hair and wears a grey suit and a black bag on his back. He wears a black top hat with a red ribbon around the rim on his head. (Source: Pretty Cure Wikia)