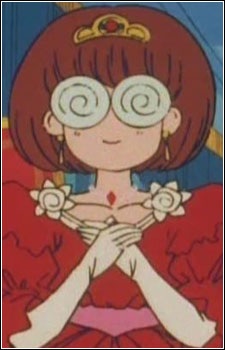 
Princess Dia was the shy spectacle-wearing princess of the D Kingdom (called Diamond Kingdom in the anime) who appeared in episode 22 of the anime series and Act 4 of the manga. She owned a famous crystal, which Luna and Queen Beryl thought might be the Silver Crystal, which would make her the Moon Princess. She was briefly possessed by Nephrite's Shadow. It turned out that her crystal was a statue of herself (in the anime and original manga), or a statue of D Kingdom's first princess (in the revised manga), and that she was obviously not the Moon Princess. She was one of the few minor characters to appear in both the anime and the manga. (Source: Project WikiMoon)