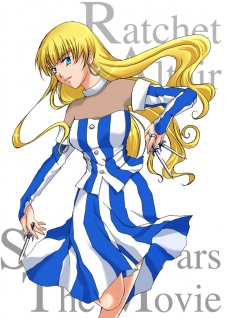 
Birthdate: June 23, 1906 Age: 22 Height: 162 cm (5'3 1/2") Weight: 48 kg B/W/H: 84/56/83 Blood Type: A Astronomical Namesake: Altair Place of Origin: Washington, DC, United States Martial Talent: Knife throwing American voice: Julie Ann Taylor (Bandai/Geneon) (For Sakura Wars: The Movie) Fenics Unit: X-41Si "Silver-Star": Height: 4m Weight: 4.4t Color: Periwinkle Blue Weapons: Throwing knives A girl highly skilled in knife throwing. She appears first in Sakura Wars: The Movie , where she was revealed to be Leni and Orihime's former captain in the European Hoshigumi. She then comes back as a supporting character in Sakura Wars: So Long, My Love. At the start, she is the captain of the New York Hoshigumi but is noticeably starting to weaken due to her failing spiritual power. After naming Shinjiro as the acting leader, she is sidelined as the vice-commander under Sunnyside helping the others coordinate their missions. She has an air of maturity around her and is usually rational and calm in most situations, though is typically a no-nonsense woman. (Source: Wikipedia)