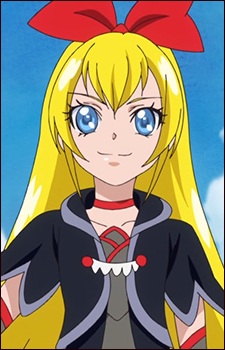 
A mysterious girl in a black dress who seems to be a second in command of the Selfishness Trio and claims to be the daughter of King Selfishness. She often behaves like a spoiled girl who is quite demanding and usually bosses around the trio. She has the power to force someone to give birth to a Selfishness, even if they hold no selfishness in their hearts. Regina is selfish, vain and spoilt, treating everyone else as her servants and, as she puts it, hating anything else more beautiful than her. If she doesn't get the selfish trio to do what she wants, she acts like a child talking to her older siblings, threatening them with telling on them to her farther. She is also playful and tries to haul Mana around and make her play instead of going to classes or being responsible. (Source: Wikipedia, Pretty Cure Wikia)