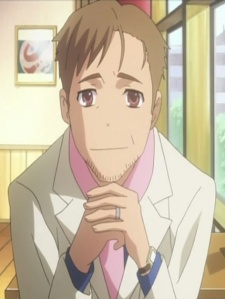 
Taiga's father, shown for the first time in chapter 12. He threatens to stop giving Taiga her living expenses if she continues to ignore his calls. He tries to re-unite with his estranged daughter after a separation with his newest (and much younger) wife, admitting it was wrong to let her go. During their short stint, he tells Ryuuji's mom that they are moving away to a bigger place together. A few episodes later in the middle of the season, he promises to come to the Cultural Festival to watch Taiga perform in her class's Wrestling Show and to see her perform in the pageant. He ends up being a no-show (after an embarrassing intro where Taiga and Ami both ask him to speak up and greet the crowd), sending Ryuuji a text message to tell Taiga that he had important business and they couldn't move in together. This leaves Ryuuji and Minori to pick up the pieces as Taiga tries to act as though she would be fine on her own.