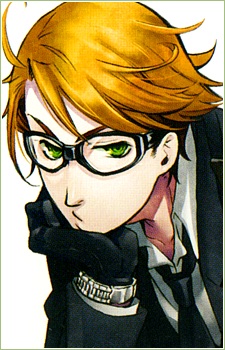 
Ronald Knox is a Shinigami sent to work with William Spears as extra personnel. Ronald appears to be a rather laid back, easy-going Shinigami, who apparently has problems with arriving on time. He seems interested in finding a way to accomplish his job quickly, as shown when he says he has never been one for overtime, and with ease, as shown when he wistfully tells William that Grell Sutcliff got to do an easier job. He also seems interested in partying, as he shares with William that he would like to finish a job quickly because he has a party to attend to afterward. His lackadaisical attitude seems to annoy William, but he does seem willing to work hard, as he states he will try his best. He also comes across as respectful, as he uses the senpai honorific when talking about Grell. He is also shown to be a ladies man, commenting he got his scythe legally modified by flirting with the receptionist. Like the other Shinigami, Ronald has a death scythe used in his job. It has been modified to look like a lawnmower, which he states was done on the principle of avoiding overtime work. Like William, he seems to have a distaste for demons, as shown by his shock when William states that the reason Baron Kelvin's manor is burning is because of a demon. However, he does not seem to hold the same level of animosity toward them, as he merely comes across as surprised, rather than angry.