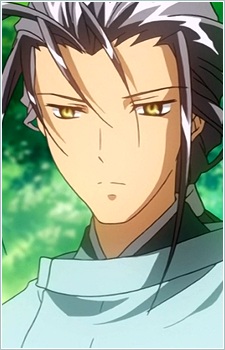 
Ryuuya is a skilled, yet low-ranked samurai in charge of Kanna's protection. Ryuuya quickly befriended Kanna and eventually they fell in love. Unfortunately, after creating a diversion for Ryuuya and Uraha, Kanna was cursed by Buddhist monks to live an endless cycle of reincarnation, suffering, and death. Ryuuya dedicated the remainder of his life to finding a way to lift the curse, and though he never did, he had a child with Uraha in the hopes that their kin would eventually find a way to break the curse. In the Air movie, Ryuuya is shown to actually be Kanna's lover and has no apparent romantic relationship with Uraha. He appears physically different from his game counterpart, with darker hair and a generally more reserved personality; changes similar to Yukito's own movie counterpart. After learning of the punishment imposed on Kanna for falling in love with him, he helps her escape captivity, though he dies from a spear wound from behind soon after she takes flight. He appears to be the source of Yukito's puppet controlling powers in the film (he is able to mix his powers with his actual swordplay, as he controlled tops to dance on his sword blade during the battle to help Kanna escape) while Uraha was the source in the game. (Source: Wikipedia)