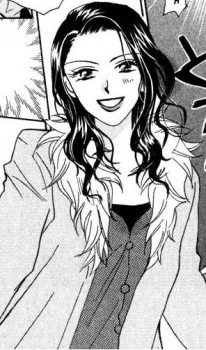 
Sakura is Makoto's eldest sister, and she's 25 years old. She left home with her boyfriend so that they could elope, and escape from the Omiai her father had set up. Angered by her actions, he took out his frustration on his other children, mostly Makoto. She is on estranged terms with her father and with her sister Tsubaki, while Makoto has conflicted feelings towards her. Her sister Akane has limited contact with her, mostly through letters which have to be concealed from the rest of the family. Every once and a while she, Akane, and Makoto would meet in secret. However, Makoto would always stand silently behind Akane, never speaking to Sakura. Later in the series she runs into Makoto and Ito during a class trip, and is pleased to see that Makoto has softened up from Ito's presence. She feels that because of Ito, Makoto can be more himself, especially after being stifled under his father's influence. With Ito's help, Makoto and Sakura finally are able to make amends after six years of silence, though it is clear that there are still a way to go in completely healing the rift between siblings. Her husband is currently a fairly successful artist and they have a young son, Satoshi. The family makes another appearance in the series when Sakura's husband has an art exhibition in Tokyo. Through Ito's scheming, Sakura eventually makes amends with her father, with a little extra help on both ends by her mother, who has to rather forcibly make father and daughter behave. She is the opposite of her younger sister Tsubaki in that she has an obsession with pretty girls, going as far as to give Ito a makeover after one encounter. Her name means "cherry blossom," following a theme of flower names for all three of the Narita daughters. (from wikipedia)