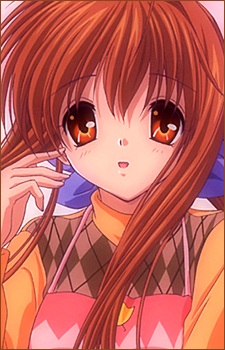 
Sanae is Nagisa's mother. Normally she's very childish and a cry-baby, but when needed she can be very strong-willed and dependable. She runs the Furukawa Bakery with her husband Akio. She often tries out strange concepts to make breads that are anything but edible and never get sold. Outside of the bakery, she tutors children. She's quite proud of the way people often mistake her for Nagisa's older sister because of her youthful appearance. Sanae plays a larger role in After Story, often comes to Tomoya's aid when Nagisa is sick and needs to be accompanied, especially during Nagisa's pregnancy. Before being a baker at the Furukawa Bakery, she was a junior-high teacher, and had to quit her job due to Nagisa's health. Sanae is the mastermind behind Tomoya and Ushio's trip to the flower cape, in hope for them to reconcile. She knows Shino, Tomoya's grandmother in his father's side, although it is never revealed how they met. After Nagisa's death, she takes care of Ushio together with Akio.