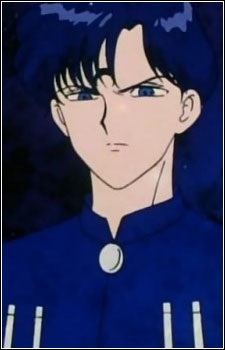 
Saphir (known as Sapphire in the English dub) is the Alchemist of the Black Moon Clan, and the younger brother of Prince Demand. He is noted for being considerably more cautious and rational than his companions. He is the only member of the Clan that does not wear earrings made from Black Crystal, despite having invented them. In the manga, Saphir prefers to work with droids (the most minor of the Clan's minions) over serving his unpredictable, easily swayed older brother. He even attempts to question the intentions of Wiseman, and the wisdom of Prince Demand in listening to everything he says. Prince Demand reacts violently to this, accusing him of wanting the power for himself. When Prince Demand kidnaps Sailor Moon and brings her to his castle on Nemesis, she stumbles into Saphir's laboratory, where he admits that their plans were insensible and that she was guiltless, but nonetheless attempts to kill her. Saphir states that he wishes to kill her because he believes all conflict comes from her and the fearsome power of the Silver Crystal. This prompts the still recovering Neo Queen Serenity to activate Sailor Moon's crystal, allowing her to transform even on Nemesis. The amount of power poured out from Sailor Moon causes Nemesis to become unstable. Saphir and Demand are rescued by Black Lady, who leads them to Wiseman's castle. Wiseman then attacks them with a mind controlling spell and loans Saphir the use of his "Demon Hands". When it is later revealed that Demand's "Evil Eye" rendered him immune to Wiseman's spell. In the anime, Saphir was portrayed more sympathetically, just as the rest of his clan was. A past relationship is alluded to between Saphir and the oldest Ayakashi sister, Petz, even though they are never in the same scene together in the manga. (The English dub also implied that he had an unrequited love for Esmeraude.) In a flashback, Saphir recalls growing up on bleak Nemesis with his brother, who promised him that one day they would go to Earth and he would show him real flowers. Saphir overhears the Wiseman talking out loud about how he is only using Prince Demand and the others for his own goals, and, barely escaping with his life, Saphir steals the power of the Black Crystal and takes it to the Earth of the past. He is briefly reunited with Petz, and aided by the Sailor Senshi, but Wiseman kills him before he can warn his brother about the coming treachery. After he dies, the bandage on his head falls off, showing that his Black Moon symbol has disappeared.