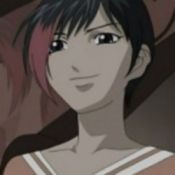 
Tachikawa's first appearance is in the third episode, where she rescues Miu and her friends when the Invaders attack a Karaoke Bar. Her combat tactics generally revolve around frontal assaults using her gate to materialize a variety of swords and knives. Summoned to the region by Reiji Kageyama, she arrives as reinforcements for the Top-Ranked hunter, Ayane Isuzu. Unlike Ayane, she does her job with zeal and seems to relish making money from her ventures. The differences in their personalities also fuels the one sided rivalry that she has with Ayane. Ayane is shown to generally ignore her and walks away even during the middle of conversations. This dismissive attitude only serves to frustrate Satoka even more. ~Wikipedia