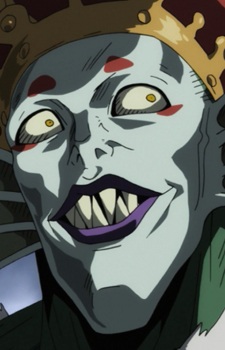 
Race: Seafolk Gender: Male Abilities: Immense Strength, Immense Speed, Regeneration, Acid Spit Occupation: King Level: Demon Affiliation: Seafolk Debut: Chapter 23/Episode 7 The Deep Sea King rules over the Seafolk as their king, and claims the deep sea as his own. Appearance: On land Deep Sea King is the most humanoid of all the Seafolk, though it is revealed that he only looks like this when he is dehydrated. Sporting an aquamarine colour, he is a large, muscular being with dark skin covering his arms, legs and back with his chest and stomach being a lighter colour. He has fins on the side of his face, sharp eyes and large fangs. He has a small pink oval over each eye, similar to eyebrows, and another at the corner of his eyes. He wears a red speedo, a large, fur-trimmed cape held together at his chest with a clasp in the shape of a fish head, and an ornate crown. The most striking feature of Sea King is that he has a heart where each of his nipples should be. When he is properly hydrated he shows his true form. He becomes much larger, his muscles expanding dramatically. The fins on the side of his face and back grow much larger, and develops new fins on his forearms and shoulders. His face becomes significantly more monstrous, with his eyes and mouth becoming larger, distorting the other features of his face. Personality: Deep Sea King is a rather sadistic individual, who enjoys causing pain in others and starting fights. He is determined to take the surface world for himself to rule. He regards people as little more than food and has no qualms about treating them as such. He is also very arrogant and prideful, considering himself to be better then everyone and stating that he stands at the very top of the pyramid of all living organisms on the planet. (Source: OnePunchMan Wikia)