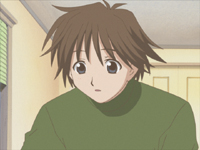 
Sensei-san, who is never given a real name, looks after the bottle fairies. He is represented by the colors brown and green. It is given that his character teaches them things about the world, but his appearances in the series are rarely significant. However, a love letter in the third episode is a crucial plotpoint to the third episode. Though his job is never stated, the last episode shows that he is a teaching assistant at a university. Kururu also develops a crush on him by the end of the series, although it is hinted that the other fairies develop feelings for him as well. -from Wikipedia-