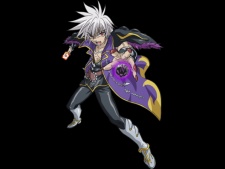 
Age: 17 Gender: male Main attribute: Darkus Shadow is shown to be a rather a bad pilot by crashing and almost destroying a ship. He also likes to pester Mylene a lot and he does not seem to take things seriously. He has a tendency to laugh a lot like Lync does. He does not like Mylene's bossy attitude but he does care about what Mylene thinks of him. Most people often refer to him by his full name. In one episode at the Bakugan battle tournament in Alpha City, the announcer calls him Shadow Vulcan by mistake. He wears nail polish, laughs a lot and he sticks his tongue out a lot. Shadow licked his Gauntlet in the episode where Hades was destroyed and in the episode where he and Mylene battled Dan and Baron.