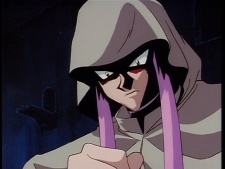 
Sirius is a shinzoku and one of Night Dragon Vorfeed's subordinates. He is voiced by Hiroshi Yanaka in the original Japanese version and in the English version by Frank Frankson. After the end of the conflict between Vorfeed and Dark Star Dugradigdu, Sirius, along with Armace and Erulogos, searched for a way to destroy Dugradigdu and restore peace to their world. They learned that some of Dark Star's five weapons were hidden in the Slayers world. Like Armace, and unlike Erulogos, Sirius showed compassion for humans, hated to create unnecessary conflicts, and wanted to save the Slayers world as well as his own. In episode 72, a girl named Anna believed him to be a legendary hero spoken of in a legend that had come to save her town. She described his hands as feeling warm and strong like her father's. He accepted her offerings of food and ultimately saved her town by blowing up a portion of the valley and exposing a well, allowing Anna's town, formerly very low on water and resources, to once again prosper. During the struggle against Dugradigdu, Armace was killed by Erulogos due to his failure to grab the final Dark Star weapon from the Slayers and later Erulogos perished at the hands of Valgarv who had fused with Dugradigdu. Sirius found himself the only remaining subordinate of Vorfeed after the final battle and, with a final farewell to the Slayers, departed for his own world, taking the five weapons with him. (Source: Wikipedia)