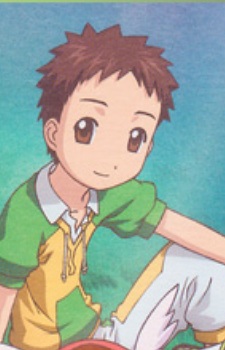 
The protagonist from the real world Elde (Science). He has a tendency to talk to flowers in the morning on his way to school, and after talking to them they mysteriously become more charming. He cares about the flowers a lot, and they help him out in return. Souta seems to have some power of his own: this was first discovered in an attempt to save Ringo from falling by Hansel's push (he unknowingly used an unknown flash and destroyed every opposing monster in the building). After he used it, he did not realize that he contained that power and thought it was Shiryuki's. He also reacted to a story card given to him by an elderly lady. So far he has collected 5 story cards of the Two World fairy tale stories (which tells the story of how Marlene turned into Cendrillon and the reason for her hatred). He is a kind and caring person, who can tell good people from bad. He is also smart and helps out in situations that the group befalls. His key power is activated whenever he feels strong emotion. He is the key of Elde, because his mother Soya was one of the sages who defeated Cendrillon 1000 years ago, and went to Elde afterwards to give birth to the child who would be safer in Elde then Fandavale. Age: 14. From: http://en.wikipedia.org/wiki/Otogi-Jushi_Akazukin